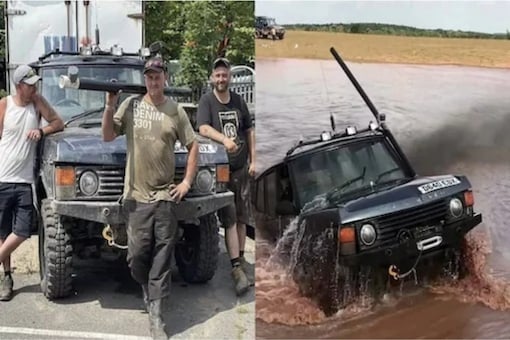 A 34-year-old scrap man from Chesterfield in the UK has been hailed the “rural James Bond” after he stunned car fans with his transformation of his old Range Rover Classic into a 007 submarine. The plan started when Nathan Gibbons and his two friends, Andrew Tuffs (36) and Blake Capuano (29), accidentally drowned out the engine of Nathan’s 1987 Range Rover Classic. The men then decided to make it amphibious. They began working on the project in April this year.

With his creative thinking, Nathan attached an exhaust pipe to the car to act as a snorkel. The three then reunited on July 18 to extend the exhaust with a 4-feet-long drain pipe that allowed him to plunge the car underwater, the Sun reported.

According to Nathan, they extended the snorkel by using duct tape to join the drain pipe and it took just “five minutes” to do so.

Once the work was complete, the father of three then put his makeshift submarine to test in a pond located in a field of Mansfield in Nottinghamshire. He had to hold his breath, cover his mouth and nose with his hand and shut his eyes before entering the water. He did so because he decided to test it with the windows of the vehicle open so that he could get out in case of an emergency. But there was no requirement of an emergency exit as Nathan drove straight through the eight-foot-deep pond, completely submerged and eventually emerged from it successfully.

“15 seconds feels like a long time when you’re underwater. For that 15 seconds you feel like you’re in that James Bond car,” he was quoted as saying. Blake had filmed the entire act. At one stage, only the snorkel could be seen sticking out at the top.

After achieving this feat, Nathan shared a video of it on Facebook where it has garnered more than 8 lakh views. He said after his achievement he feels like Roger Moore from The Spy Who Loved Me.