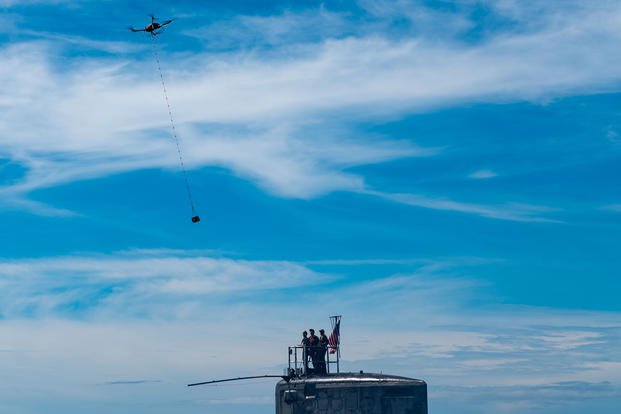 An unmanned aerial vehicle delivers a five-pound payload to the Virginia-class fast-attack submarine USS Hawaii (SSN 776) during a training exercise off the coast of Oahu, Oct. 10, 2019. (U.S. Navy photo/Michael B. Zingaro)

In a first for the Navy, a quadcopter drone was flown more than a mile from shore on Oahu to deliver a 5-pound payload of circuit cards, medical supplies and food items to the submarine USS Hawaii in a potentially radical new way to provide logistics resupply of small items to subs at sea, officials said.

The partnership with the University of Hawaii to develop the capability, leading to the Oct. 10 test, resulted in the creation of the submarine force’s first unmanned aerial vehicle squadron in the Pacific, according to the Navy.

The new drone application comes with the Pentagon sharply increasing its unmanned-system funding and testing as a more economical way of meeting challenges from China and Russia.

A large percentage of parts that are needed on submarines weigh less than 5 pounds, and drone delivery could remove the need to pull into port for some parts or medical supplies, said Lt. Cmdr. Christopher Keithley, who is with the U.S. Pacific Fleet submarine force.

The concept originated with the Submarine Force Innovation Lab (iLab ) a year ago. A partnership was created with UH’s Applied Research Laboratory to put the idea to the test with a $50, 000 Skyfront Perimeter gas-powered quadcopter.

“We are already seeing the impact that this one idea can have on the entire fleet, ” Rear Adm. Blake Converse, commander of the submarine force for U.S. Pacific Fleet, said in a Navy release. “The joint effort between the sailors at COMSUBPAC and the University of Hawaii has resulted in delivering necessary supplies to submarines that can save time and money, allowing us to stay in the fight.”

The UH-Navy team developed a “snag ” pole that is extended off the sail of the sub and a release mechanism for the package being delivered. A prototype was tested on the back of trucks.

“As the training progressed and the drone innovations became more reliable, the team was able to demonstrate the capability onto a small patrol boat out of Pearl Harbor, ” Keithley said in the Navy release.

UH said the delivery method was straightforward, but the university tried to make “the homework tougher than the test ” with extensive training of sub sailors over six months.

With the drone flown off the west side of Oahu on Oct. 10, the snag pole and delivery design “performed perfectly as the payload of parts was safely delivered onboard the submarine, making history as the first-ever drone delivery onboard an underway submarine, ” Keithley said.

The Navy plans to deploy 51-foot unmanned submarines that can travel up to 7, 000 miles.

A 132-foot robot warship–the Sea Hunter–last year became the first ship to successfully navigate autonomously from San Diego to Pearl Harbor and back to San Diego.

This article is written by William Cole from The Honolulu Star-Advertiser and was legally licensed via the Tribune Content Agency through the NewsCred publisher network. Please direct all licensing questions to [email protected].