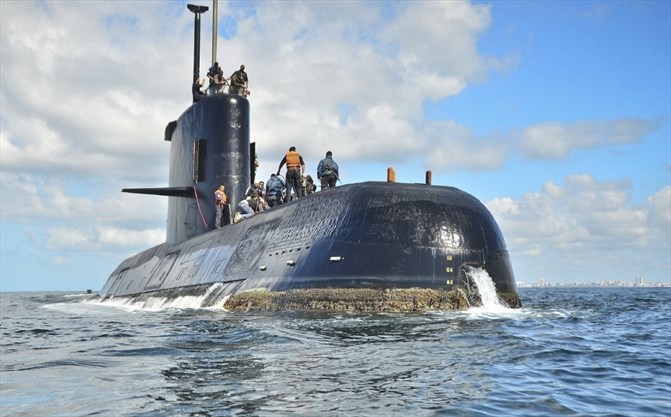 MAR DEL PLATA, Argentina — After an initial burst of optimism that they might be closer to finding a submarine that has been missing since Wednesday, Argentine authorities on Sunday began expressing caution as fears grew about the fate of the 44 crew members.

The Defense Ministry on Saturday based its hopeful statements on reports that there had been seven attempts to communicate by satellite phone around the search area. But on Sunday the navy said that it was still analyzing the calls and that there was no “clear evidence” that the vessel originating the calls was the submarine.

Iridium, a satellite phone company, also said in a statement that it had found no evidence that the Iridium phone aboard the submarine had been used since Wednesday. It was not immediately clear whether satellite equipment from a different provider might have also been on-board.

The search for the San Juan was hampered Sunday by inclement weather and strong winds in the area off Argentina’s Patagonian coast, with waves reaching about 20-26 feet, said Adm. Gabriel González, chief of the Mar del Plata base that was the submarine’s destination. As a result, most of the search efforts were conducted by planes rather than ships.

The submarine, which stopped communicating Wednesday, had been due to arrive back in port Sunday. The anxious families of the crew members have been gathering inside the naval base.

“We continue to pray and wait!!” Marcela Moyano, whose husband, Hernán Rodríguez, is on the submarine, wrote on Facebook. “A little bit confusing, no??? They won’t take me out of here until I see you get down from the submarine, my love.”

The navy has two psychologists, one psychiatrist and two doctors at the base for the family members, said a navy official who was not authorized to speak on the record.

International participation in the search grew Sunday even as the navy said that most of the efforts to find the submarine would be by air because of the bad weather.

The U.S. navy deployed two “independent rescue assets” from its Undersea Rescue Command, which is based in San Diego. This is in addition to the Navy P-8A Poseidon aircraft and the NASA P-3 research aircraft that had already joined the search.

The British military is also providing assistance, which is particularly notable given the war Britain and Argentina fought in 1982 over the Falkland Islands, which Argentina calls the Malvinas and has long claimed as its sovereign territory.

A British navy ship has started to trace the submarine’s route from the moment of last contact until its intended destination. The navy also deployed its “specialist Submarine Parachute Assistance Group,” and another patrol vessel — the HMS Clyde — is scheduled to join the search from the Falkland Islands. A C-130 aircraft that is also based in the Falklands “stood by to assist with the aerial search efforts,” the navy said.

The NATO Submarine Rescue System has joined the search, as have planes and ships from Brazil and Chile, according to Argentina’s navy. Ships owned by private companies, including France’s oil company Total, are also scheduled to join the efforts.

Pope Francis, who is Argentine, mentioned the missing submarine during his Sunday prayer, the second day in a row he publicly referred to the San Juan crew.

The submarine was 240 nautical miles from the coast when it last communicated with the base.

The San Juan was travelling from the Patagonian city of Ushuaia to Mar del Plata, conducting routine security patrol and military training exercises. Argentina has three submarines — one of which is under repair — and they are frequently deployed to combat illegal fishing.