Remote operated vehicles (ROV) are used throughout the world for a variety of projects by many different entities. From military, police, fire and rescue teams searching for lost evidence or drowning victims to commercial diving companies performing inspections on various types of tanks and ship hulls, ROVs have become a staple in underwater search and survey operations. 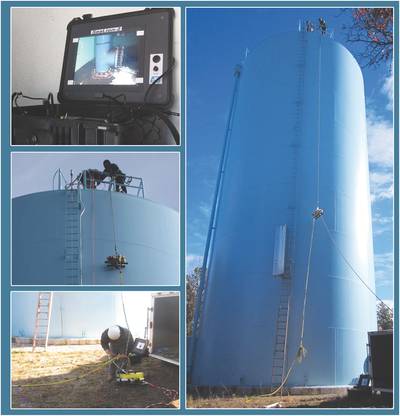 Underwater equipment manufacturer JW Fishers said its Seaotter-2 and SeaLion-2 are the ROVs that many agencies purchase when they need the right tools for the job. A variety of options are available from a mountable sector scanning sonar (SCAN-650) to a Remote Metal Detector (RMD-1). Using an ROV in tandem with a SCAN-650 allows the end user to drive the vehicle around a target area shooting video while also scanning the area using sonar to create a detailed computer image of the surrounding environment. This proves to be quite useful when operating in dark water where video feed doesn’t quite do the job. The RMD-1 is another indispensable accessory that turns an ROV into a metal detecting machine and is interchangeable on any manufacturer’s vehicle.
Draining water tanks to inspect or clean them wastes a significant amount of water, time and money. These by-law inspections are a requirement for local towns or municipalities and, without the proper tools, they must drain the tanks to visually inspect them. A time-saving and cost-effective alternative is the utilization of an ROV. Recently, a tank inspection was completed on a town water supply in Plymouth, Mass. using JW Fishers’ SeaLion-2. The ROV was hoisted up and deployed by the inspection team within a few short minutes. The motorized vehicle was not affected by strong coastal winds and the inspection was completed in a timely fashion.
Overseas, Works of Diving Hong Kong continue to utilize its ROV to perform tank inspections and aid their customers with underwater video when needed.
Alaska ROV Services of Haines, Alaska, is owned and operated by Tod Sebans and his business partner Neil Einsbuch who recently purchased a SeaLion-2 with a SCAN-650 and a Side Scan Sonar system. Alaska ROV Services are ready for hire to perform any underwater search or inspection and their goal is to service the entire state. Not only does Alaska have the most coast line in the entire country, it is also dotted with many lakes, bays, and rivers. Throughout Southeast Alaska there are an incredible number of commercial, charter, and sport vessels that use the entire “Inside Passage”.
Alaska ROV Services are spreading the word to state troopers, search and rescue teams, university marine research departments, marine salvage and repair companies, harbormasters and more to let them know what services they offer. “With the SeaLion 2, Scan-650 and SSS600-1200 we feel we have a good start in the field,” Sebans said. “Hopefully by next winter we can add the Magnetometer to our gear for evidence recovery as well. Having tides in our area that range to 25′ and currents that flow through some of the narrows at 8 – 12 knots can make operating the equipment challenging. Patience and practice will pay off I’m sure.”
Snohomish County Sheriff’s Office owns and operates a JW Fishers SeaLion-2 ROV for searches of the vast waters of Washington State. Snohomish County is located on Puget Sound, between Skagit County to the north and King County (and Seattle) to the south. Covering 2,090 square miles, it is the 13th largest county in total land area in Washington. Snohomish County’s geography includes many bodies of water from oceans to lakes and rivers. The sheriff’s office regularly utilizes its ROV for searches and dive training exercises. Over this past winter the SeaLion-2 was used during an extensive training dive at Fish Lake. The ROV operated under a layer of ice which proved to be much safer than sending a diver into the frigid waters.
A few of the many other agencies using JW Fishers search equipment are the FBI, Royal Canadian Mounted Police Underwater Recovery Team, Search & Rescue Society of British Columbia, Summit County Sheriff in Colorado, New Orleans Police Department, Delaware State Police, Oxnard Fire Department in California, Grand Prairie Fire Department in Texas, the Dubai Police, and Indonesia’s National Search & Rescue Agency.