Forum Energy Technologies, Inc. has delivered a custom built simulator to California Science Centre, the largest hands-on science museum in the western United States. The dual simulator station provides visitors with the experience of operating a subsea remotely operated vehicle (ROV) for themselves. 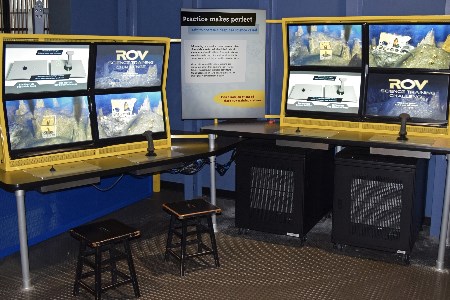 The core technology used in the simulator is Forum’s proprietary VMAX™ ROV Simulation Software used by Forum’s ROV customers for training and evaluation of their ROV pilots. Forum’s development team have tailored the control interface within the software to allow the virtual ROV to be flown by visitors with no prior experience. The control consoles provided use the same robust hardware as Forum’s standard ROV control consoles. The system runs in both English and Spanish.

The exhibit features two simulation stations, each with a main joystick to control the ROV and a second smaller controller that operates the ROV’s on board manipulator.

VMAX developers worked with the Science Centre team to develop two missions, one for each simulator console, each designed to provide the user with an experience of piloting an ROV and using onboard tools to perform a task. One scenario in the simulation sees users navigating their way around a series of hydrothermal vents billowing out clouds of volcanic fluid. The second involves collecting samples of sea life and identifying species.

Andy McAra, Product Director, Visualsoft and VMAX at Forum, said: “The VMAX team were very excited to be awarded this contract by the California Science Centre. We are much more used to developing scenarios with man-made structures found in offshore oil and gas fields whereas this project involved interaction with natural obstacles and wildlife. One of the big challenges was striking a balance between making the system operable by inexperienced users whilst providing those users with a realistic experience. This is certainly one of the most enjoyable simulator installations that the VMAX team has delivered.”