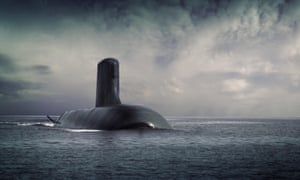 Australia’s new fleet of submarines will be built by France in South Australia, Malcolm Turnbull announced in Adelaide on Tuesday.

The award of the $50bn contract to French shipbuilder DCNS means the fleet will be new Barracuda-class submarines which will be built to Australian specifications for a conventional, non-nuclear powered submarine.

Germany’s ThyssenKrupp Marine Systems (TKMS) and the government of Japan were the two unsuccessful bidders in the bid to build 12 submarines to replace Australia’s Collins-class submarines.

The submarines will cost $20bn to build and $30bn to sustain after they come into operation in the middle of the next decade.

Turnbull said the submarine contract would “secure Australia, secure our island nation, but [also] ensure that our economy transitions to the economy of the 21st century”. The submarine project alone would create 2,800 jobs, he said.

Turnbull said the submarines “will be built here in Australia … with Australian jobs, Australian steel, and Australian expertise”. However, some components may come from other states of Australia or other countries including the combat system, which will be sourced from the US.

He said the cost implications of building some of the vessels overseas relative to the completely local build were “comprehensively examined”. Nevertheless, he said the government was committed to the principle that “every dollar we spend on defence procurement as far as possible should be spent in Australia”.

“I want to thank TKMS and the government of Japan for their proposals, which were of a very high quality.

“However, the recommendation of our competitive evaluation process … was unequivocal, that the French offer represented the capabilities best able to meet Australia’s unique needs.”

According to reports, former prime minister Tony Abbott had favoured the Japanese bid, but after facing a leadership spill in February 2015 he opened the contract up for a “competitive evaluation process”.

Abbott said it was reasonable to expect the government to try to secure the best value and the best product and “to give Australian suppliers a fair go”.

In September Japan signalled it was willing to perform construction work in Australia, meaning all three bidders were prepared to build the submarines in Australia.

In March a defence white paper leaked which purported to show that under Turnbull and his defence minister, Marise Payne, the entry into service of a replacement for the ageing Collins-class fleet had been delayed by “nearly a decade”.

Abbott confirmed that claim and said he was disappointed and flabbergasted by the delay.

But the secretary of the defence department, Dennis Richardson, rejected the claim there had been any delay to the scheduled introduction date.

On Tuesday morning the opposition leader, Bill Shorten, said Labor was committed to building, maintaining and sustaining all 12 submarines in Australia.

“It was the resolute opposition of the Labor party which has forced the Liberal party back to the table to stand up for Australian jobs and Australian-built submarines,” he said.

Labor trade and investment spokeswoman, Penny Wong, said the government’s announcement had left “wriggle room” for commercial negotiations to allow the first few submarines to be built offshore. She called on the government to rule out such a hybrid build.

But he said it could be eight years before we start seeing those jobs in making the submarines. He called on the government to guarantee Australians would also build $2bn worth of supply ships and a $500m icebreaker.

“We’ve got a lot of jobs that would go in our ship building industry in the meantime … unless we act with decisiveness to make sure the surface ships are built here so we don’t export jobs over seas.”

DCNS chief executive, Sean Costello, has said while exact details remain confidential, the Shortfin Barracuda is over 90 metres in length and displaces more than 4,000 tonnes when dived.

“The Shortfin Barracuda will remain in service until the 2060s and will be updated and upgraded with new technology developed in France and Australia,” he said.

Payne said DCNS was chosen because it best met the requirements for submarines with considerable range and the capacity to remain undisturbed and undetected for extended periods.

Chairman of TKMS’s Australian arm, John White, said: “the competitive evaluation was conducted with high integrity and professionalism and we were privileged to be part of it”.

“We are naturally disappointed, but we stand ready to provide support for Australia’s future submarines project with our unrivalled experience, leading technology and track record in building submarines in the customer’s own country.”

Japanese defence minister Gen Nakatani said the decision was “deeply regrettable”. “We will ask Australia to explain why they didn’t pick our design.”

An unidentified Japanese foreign ministry official told national broadcaster NHK “we have been looking to extend the special relationship between Japan and Australia so this decision is extremely disappointing”.

“But the decision will not effect our work to deepen defence cooperation with Australia or the US.”