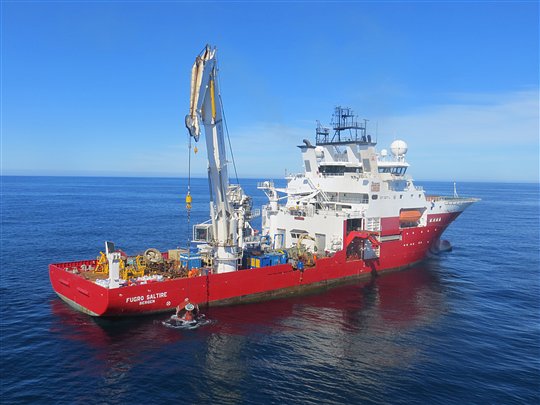 The company has equipped its trenching vessel, Fugro Saltire (photo), with a compact, custom-made, cable-lay spread that comprises a reel drive system to store the cables, a tensioner to lay them, twin winches and a quadrant deployment system on rails. The equipment is fitted to the rear deck of the vessel alongside the existing trenching equipment.

In operation the cables are initially pulled into the base of the wind turbine generators (WTG) and then laid along the seabed using Fugro Saltire’s dynamic positioning system to line them up accurately with the destination WTG. They are then pulled in using the quadrant system to manage the cable during over-boarding and pull-in. The quadrant’s compact design and deployment allows Fugro to control the cable very precisely while pulling in the second end.

An important additional innovation introduced to the system is new 3D sonar technology to supplement ROV support, and monitor precisely, onsite, cable touch down during the cable-lay and pull-in operations, where the daily hazard of very high currents can limit the use of an ROV.

The initial concept for the new cable-lay capability was developed during trenching operations at the Humber Gateway Offshore Wind Farm, when E.ON asked Fugro to investigate laying some cables from the Fugro Saltire. Fugro’s engineers fitted the cable-lay equipment in only six weeks, ahead of E.ON’s deadlines, and cable-laying was completed by February 2015.

“The mobilization of the cable-lay spread on the Fugro Saltire has widened our successful working relationship with E.ON on the Humber Gateway project. As well as trenching 77 array cables, we installed eight array cables along with second end pull-ins of cables already laid by other contractors,” said Mike Daniel, Trenching Business Line Manager at Fugro Subsea Services. “We can now offer clients simultaneous cable-laying and burial from a single vessel, or alternatively our larger subsea construction vessel Fugro Symphony can be laying cables, while the Fugro Saltire is trenching them, speeding up operations and saving time for our customers.”