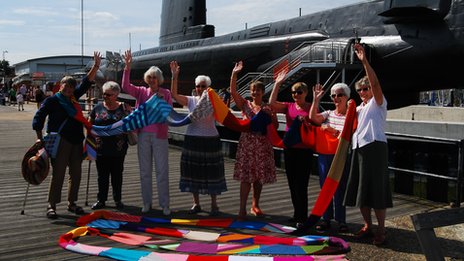 Knitting groups including the Priddys Purlers are taking part in the project.

Knitters across Hampshire are making a giant scarf to wrap around the last surviving British WWII submarine.

It is to highlight the final stage of the £7m restoration of HMS Alliance, which has corroded after decades of exposure to sea water and dampness.

The 60-metre (196 ft) scarf for the conning tower is being made by more than 200 knitters from Gosport.

HMS Alliance, based at the Royal Navy Submarine Museum in Gosport, will be relaunched in Spring 2014.

The knitters have completed 40 metres (131 ft) and have appealed for more wool to finish it off.

The scarf will be unveiled in time for Christmas.