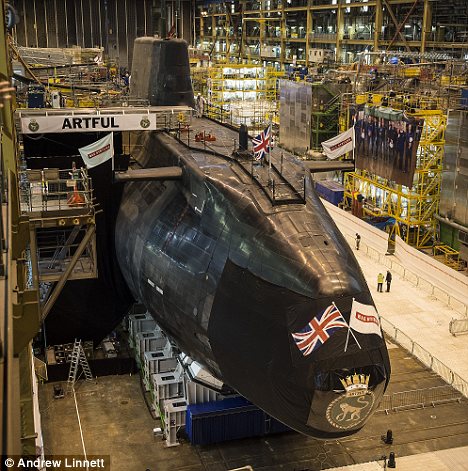 Unveiled: The 7,400 tons, 320ft Artful is the third in a line of seven nuclear craft, each costing more than £1bn

Yesterday’s naming ceremony was performed by Amanda, Lady Zambellas, wife of the Royal Navy’s First Sea Lord, Admiral Sir George Zambellas. HMS Artful will enter a testing programme before being launched and handed to the Navy.

BAE is prime contractor for the Astute programme and has already started the early design phase for the next generation of nuclear submarines, which are likely to carry the Trident nuclear missile system.

John Hudson, managing director of BAE Systems Marine-Submarines, said the design and build of a nuclear submarine was a complex and challenging task which took skill and innovation.

‘We have taken account of lessons learnt from the build of previous submarines,’ he said.