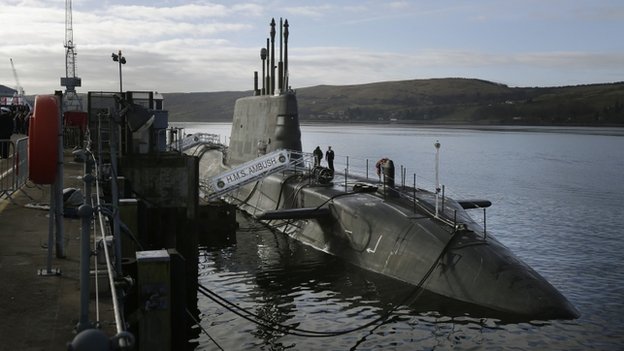 HMS Ambush is due to enter operational service later this year

The Royal Navy's most advanced attack submarine has officially joined its fleet on the Clyde.

The £1.6bn nuclear-powered 7,400-tonne vessel was given the title HMS Ambush in a ceremony at Faslane naval base.

It is the second of the navy's Astute-class attack submarines and was launched in January 2011 at the BAE Systems shipyard in Barrow-in-Furness.

It has been undergoing sea trials since arriving at its home port at Faslane in September last year.

HMS Ambush is due to enter operational service later this year.

Commanding Officer Peter Green said: "The crew are immensely proud to mark the commissioning and to see the culmination of many months of hard work readying HMS Ambush for service with the Royal Navy.

"The crew are looking forward to the challenges ahead and to exploring the full range of the submarine's capabilities before she enters full operational service later this year."