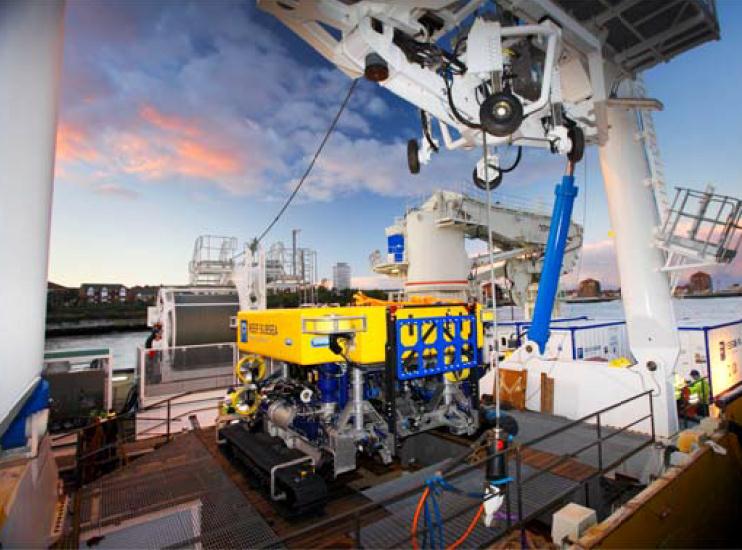 Reef Subsea announced that its subsidiary company, Reef Subsea Power and Umbilical Ltd., with offices in Stockton-on-Tees and Aberdeen, has successfully completed a series of offshore trials on its recently launched Q1000 subsea trenching ROV. The capabilities of both the trencher and its Launch & Recovery System (LARS) have been tested rigorously to prove they are capable of operating as per their design specification.

Reef Subsea Power & Umbilical (RSPU) began mobilising the innovative Q1000 trencher onto the Reef Despina in late October at the Port of Sunderland (Newcastle upon Tyne, England). During the trials, the Q1000 was tested in multiple conditions and RSPU has confirmed that all functions on the Trenching ROV are satisfactorily operating to the design specification.

Only last month, the trencher was delivered to Reef Subsea Power & Umbilical following ten months of design and build in collaboration with manufacturer SMD, based in Newcastle upon Tyne. On 4 October, a launch ceremony gathered key players of the Oil & Gas and Renewables industry sectors who had the opportunity to look at the Q1000 in detail and discuss its capabilities with RSPU management.

The Q1000 is a modern free flying ROV jet trencher, which can operate in water depths up to 2000 metres and in a variety of soil conditions. The trencher has lOOOhp installed power and is ideally suited to the burial of rigid and flexible pipelines, umbilicals and cables for the oil and gas, renewables, power, telecommunications and subsea defence sectors, to 3 metres trench depth.

Tim Sheehan, Chief Operating Officer of the Reef Subsea Group, stated: “The successful completion of the sea trials confirms our initial choice for a powerful and versatile seabed trencher able to deliver reliable and quick solutions to both the Oil & Gas and Renewables sectors. We have lots of discussions at the moment with clients and we are happy to see that the Trencher has immediately raised the attention of several players from both markets.”

Daryl Lynch, Managing Director of Reef Subsea Power & Umbilical, said: “We are delighted that the Q1000 trencher performed so well during its offshore trials. Reef Subsea believes it is vital to invest in real world trials to ensure the machine is operating to specification before it begins work for our clients.”